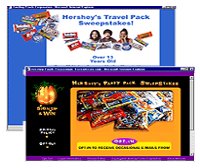 Company Overview: Hershey Foods, known throughout the world for their chocolate products, was founded by Milton Hershey in 1894. Now a market leader in the US candy business, with annual sales of $4,221.0 million in 2000, Hershey distributes to over 2 million retail outlets in North America and exports to over 90 countries.

Before Interactive: Hershey’s e-Commerce goal is to become the North American leader in selling and branding confectionery on the Internet. Hershey’s e-Commerce team, in conjunction with sales and marketing identified opportunities to sustain its leadership position in the confectionery market through the proactive management of emerging e-Commerce, consumer-relationship and business-partnership opportunities afforded via the Internet. However, first, they needed to determine what would drive sales and activity on the web site. What would their customers want from a Hershey’s web offering?

The Interactive Deployment: Hershey’s, working with Interactive launched a web site for a Halloween Sweepstakes Giveaway at Trickortreats.com. Its purpose was to determine via a web survey if Hershey’s customers were interested in establishing a dialog or were only interested in the sweepstakes. Approximately four weeks from initial concept, trickortreats.com launched in Mid-September.

At the end of the contest on October 31, Interactive utilized a random selection engine to determine the 10 contest winners. To announce the winners, Interactive executed a direct marketing campaign. The campaign results were a low bounce back rate of (3%), an unsubscribe rate of (0.6%) and a 12% click through rate to the Hersheys.com web site.